The following research concerns EIBI (Early Intensive Behavioural Intervention) which is ABA as applied intensively to young children with autism.

This study compared effects of ABA treatment with special education provided at local public schools for children with autism or PDD-NOS. The follow-up assessment, conducted approximately 3 years after the treatment begun, showed that the ABA treatment group scored significantly higher as compared to the two comparison groups on IQ and adaptive functioning. Six of the 21 ABA treated children were fully included into regular education without assistance, and 11 others were included with support; in contrast, only 1 comparison child was placed primarily in regular education.

“Results suggest that some 4- to 7-year-olds may make large gains with intensive behavioral treatment, that such treatment can be successfully implemented in school settings, and that specific aspects of behavioral treatment (not just its intensity) may account for favorable outcomes.”

These research papers were both based on data from a study where 44 children were provided with ABA programmes. All programmes had an ABA consultant provided and some also had a team of tutors and senior tutors provided.  After one year, results showed that both groups improved significantly on IQ, visual-spatial IQ, language comprehension, expressive language, social skills, motor skills, and adaptive behaviour. The children in the study increased their IQ by an average of 16 points in one year.

It was also investigated whether the frequency of workshop consultation affected a child’s progress. Results showed that an increased amount of consultancy was related to increases that the children make in their IQ.

Successful intervention was characterised by: treatment in the child’s natural environment, intensive intervention, treatment based on ABA principles, staff training and management, parental involvement, evaluation of progress, and research-based provision.

A systematic literature search for studies reporting effects of Early Intensive Behavioural Intervention. ‘These results support the clinical implication that EIBI at present should be an intervention of choice for children with ASD. However, randomised controlled trials comparing EIBI to other interventions are still needed’. (Page 449)

The authors found statistically significant improvements in IQ and adaptive behaviour. They also reviewed a recent meta-analysis published in 2009 (Spreckley & Boyd) that purported to show that EIBI produced no better effects than what was described as standard care. The Eldevik team identified several serious errors in the Spreckley & Boyd meta-analysis.

The study interviewed both mothers and fathers of children with autism receiving EIBI (early intensive behavioural intervention) to document their perspective on the impact of programmes on their personal and family life. Fifty-three parents (32 mothers and 21 fathers) of children with autism were interviewed. Parents were asked to identify practical benefits and difficulties of running the EIBI programme for all family members. The data revealed many benefits for family members, for example:

A comparison of intensive behaviour analytic and eclectic treatment for young children with autism. Research in Developmental Disabilities, 26, 359–383.

This study compared effects of three treatment approaches on children with autism or PDD-NOS. The approaches were EIBI, 1:1 or 2:1 eclectic intervention in public special education classrooms, public early intervention in small groups. Measures included IQ, language functioning, and adaptive functioning. The follow-up assessment, approximately 14 months after the treatment begun, showed that the ABA treatment group scored significantly higher scores as compared to the two comparison groups on all measures. Learning rates at follow-up were also substantially higher for children in the ABA group than for participants in either of the other two comparison groups.

‘There is little doubt that the use of behavioural procedures has resulted in major improvements in the education, management and treatment of children with autism in the last three decades. The benefits are particularly striking when parents are involved in therapy and such techniques are now widely accepted as playing a crucial role in intervention’. (Page 9)

Evidence suggests that preschool children with autism show cognitive and functional improvement when they receive behavioural intervention with applied behavioural analysis for about 20 hours per week or more.

This study looked at the potential savings of providing EIBI to all children with autism for three years (starting before the age of 6 years). They estimated that it would save approximately $200,000 per child for ages 3-22 years and up to $1,000,000 per child for ages 3-55 years. These are even conservative estimates which assume that some children will not benefit at all.

This was a landmark study that highlighted how useful ABA could be as a treatment for children with autism. The research showed that 90% of children receiving ABA substantially improved compared to the control group who received eclectic treatment. Close to half 47% attained a normal IQ and passed first grade (compared to only 1 child in the control group).

tested within the normal range on adaptive and social skills.

Follow-up research showed that the ‘best outcome’ children in the 1987 study maintained their skills and could succeed in life without costly special education and residential services.

The report published in 2009 by The National Autism Center in the US provides comprehensive information about the level of scientific evidence that exists in support of the many educational and behavioural treatments currently available for individuals with autism.

Interestingly approx 66% of those treatments categorised as established were developed exclusively from behavioural literature i.e. applied behaviour analysis and positive behavioural support. Twenty-two other treatments were classified as emerging, such as massage/touch therapy, music therapy and sign instruction. Five treatments were highlighted as un-established academic interventions, auditory integration training, facilitated communication, gluten and casein free diet and sensory integration. These were considered un-established either due to the quality, quantity or the consistency of the research findings being poor or not applying to individuals with ASC.

These key points regarding the research evidence for behavioural interventions were evident in the report:

1. [The] ‘pattern of findings suggests that treatments from the behavioural literature have the strongest research support at this time’. (Page 52)

‘Behavioural Package has demonstrated favourable outcomes with three-quarters of the behaviours that are often targeted to decrease.’ (Page 51)

3. Behavioural Package is the only treatment with favourable outcomes for all age groups. (Page 53)

This is an extremely comprehensive and rigorous review of past research. Of the 1517 articles originally identified, only 43 publications were identified as eligible for appraisal and inclusion in the review.

The key findings and conclusions were that there is consistent evidence across a range of studies that interventions based on the principles of ABA can produce beneficial outcomes in young children with autism, and appear to hold more promise when compared to eclectic/standard care approaches.

The purpose of this paper is to provide a comprehensive synthesis of the studies on Early Intensive Behavioural Intervention (EIBI). This synthesis includes an examination of the characteristics of the experimental methods, participants, and intervention programme (i.e., EIBI), as well an analysis of the effects of EIBI on participants (e.g., outcome data).

Findings from the review suggest that “EIBI is an effective treatment, on average, for children with autism.” (Page 23)

A field effectiveness study of early intensive behavioral intervention: Outcomes for children with autism and their parents after two years. American Journal of Mental Retardation, 112, 418–438.

This study compared effects of ABA with ‘treatment as usual’ for children with autism within the UK. The follow-up assessment showed that the ABA treatment group scored significantly higher as compared to the comparison group on intelligence, language, daily living skills, positive social behavior, and a statistical measure of best outcome for individual children. Measures of parental well-being, obtained at the same three time points, produced no evidence that behavioral intervention created increased problems for either mothers or fathers of children receiving it. The ABA group showed significantly better score on responding to joint attention as compared to the comparison group, but not in initiating joint attention.

A review of the research to identify the most effective models of best practice in the management of children with autism spectrum disorders. Sydney: Centre for Developmental Disability Studies.

This review of research literature relating to the management and treatment of children with autism is to identify the most effective models of best practice. The review concluded that “There is universal agreement that behavioural interventions have produced positive outcomes for children with autism that are well supported by research”.

The evidence from this study suggests that early intervention programmes are beneficial for children with autism, often improving developmental functioning and decreasing symptom severity. Significant increases in language and communication abilities in the treated group occurred in most studies and interventions with many targeted hours per week resulted in increases in IQ.

Across all the studies cited, improvements in language, communication, and IQ, and reduction in severity of autism symptoms indicate that the core symptoms of autism appear malleable in early childhood.

This letter in the Lancet provides a positive reference for the research and ABA as an intervention.

Twenty-four children with autism were randomly assigned to a clinic-directed group, replicating the parameters of the early intensive behavioural treatment developed at UCLA, or to a parent-directed group that received intensive hours but less supervision by equally well-trained supervisors. Outcome after 4 years of treatment, including cognitive, language, adaptive, social, and academic measures, was similar for both groups. After combining groups, we found that 48% of all children showed rapid learning, achieved average posttreatment scores, and at age 7, were succeeding in regular education classrooms. Treatment outcome was best predicted by pre-treatment imitation, language, and social responsiveness. These results are consistent with those reported by Lovaas and colleagues

Smith, Groen, & Wynne examined the effects of ABA treatment for children with autism and children with PDD-NOS. The EIBI group received a mean of 24.5 hours per week of one-to-one ABA treatment during the first year of intervention with a gradual reduction of treatment hours over the next 2 years. Participants in the control group received 3 – 9 months of parent training for several hours per week. Measures included IQ, visual-spatial IQ, language functioning, adaptive functioning, socio-emotional functioning, academic achievement, class placement progress in treatment, and parent evaluation. At follow-up the ABA treatment group scored significantly higher as compared to the parent training group on IQ, visual-spatial skills, language (assessed the by score combining comprehension and expression), school placement and academics. The ABA treatment group gained an average of sixteen IQ points. By comparison, the parent training group lost one IQ point. Children with PDD-NOS gained more than those with autism. Twenty-seven percent of the children in the ABA group achieved average post-treatment scores and were succeeding in regular education classrooms. 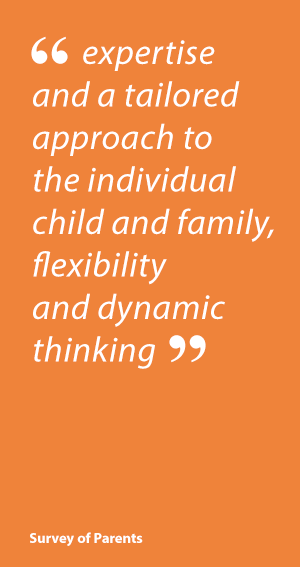