childautism.org.uk / About Autism / Causes and Cures for Autism

Causes and Cures for Autism

At this time, it is not known exactly what causes autism though it is widely believed to be the result of an interaction between environmental and genetic factors. This means that a child can be born with vulnerability toward developing autism which is later triggered by physical factors in their environment.5

Theories of causes lead to interventions

Over the years there have been many theories about the causes of autism. In the 1950s and 60s, it was believed that autism was caused by cold parenting. This led to the promotion of ‘Holding Therapy’, an approach where the mother holds their child for a prolonged time and forces eye-contact in order to remediate a presumed attachment disorder. Whilst children on the receiving end have reported terrible suffering as a result, the professionals involved overlooked the fact that the parents also had children who did not have autism.

Although this theory and intervention have long been debunked, Research Autism currently lists 123 different interventions for autism and nearly all of them are the result of a theory about a possible cause.

Over the years many theories (and interventions) have come and gone. One notable exception is EIBI (Early Intensive Behavioural Intervention). This approach applies ABA (Applied Behaviour Analysis) techniques to help children with autism. This treatment has the highest evidence base and is one of the few that was not developed from a theory of a cause. Find out more about ABA and autism.

Can Autism Be Cured?

Autism is a lifelong condition and currently cannot be cured.

However autism can be treated and with the right early intervention, most children experience significant improvement in their quality of life and many children learn to function independently in mainstream school.

Child Autism UK specialises in helping children who are diagnosed with autism reach their full potential.  This intervention works by enhancing intellectual, academic, social and emotional behaviours so that children can take better advantage of educational and social opportunities available in the community.

You might like to read Sam’s story.  Sam displayed many of the characteristics of autism, but now he attends school and is very much part of his class, even playing in the football team.

Child Autism UK would always warn parents to be wary of professionals who might claim to ‘cure’ or ‘recover’ the children they work with, but as Sam’s story shows, much can be done to help children become active members of their community and family.  Read more about effective early intervention, commonly called ABA. 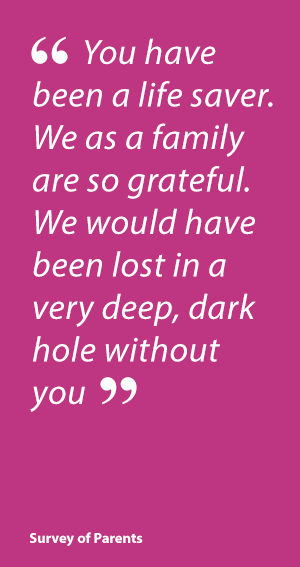